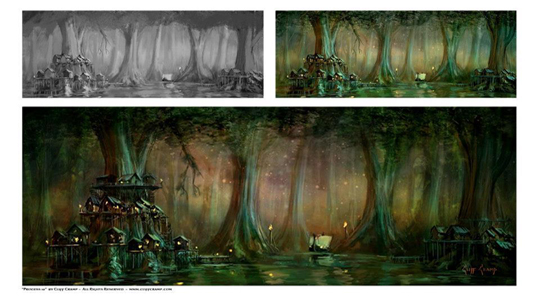 Hala Swearingen is an Assistant Professor in the Visual Arts Department at CSUF.

HOW MANY SKETCHES DOES IT TAKE TO SET A CHILDREN'S BOOK COVER DESIGN? WHAT IS INVOLVED IN ENVISIONING THE ART OF THE STAR WARS DVD BOX SET? WHAT GOES INTO CRAFTING THE PHOTO-REALISTIC ILLUSTRATION OF A HARLEY FOR A MAGAZINE COVER?

In the West Gallery of the CSUF Pollak Library, the exhibit,   Illustration: The Creative Process, featuring six Cal State Fullerton illustration faculty, reveals the seldom seen: thumbnails, sketches, pictorial research, color studies, tools, and techniques that lead from budding visual concepts to final illustrations.  Published projects spanning 30 years in all of the major markets appear on display: advertising, editorial, game boards, consumer products, comics, and more.  Techniques range from traditional pencil roughs, brush inking, scratchboard, acrylics, oils, and watercolors, to Photoshop sketching, Illustrator vector design, and digital painting. Art students and the campus community will discover what their professors create when they step out of the classroom and into the studio.

On exhibition July 1 - September 30, 2013, in the Atrium Gallery of the Pollak Library.